From The Center Of The World ... 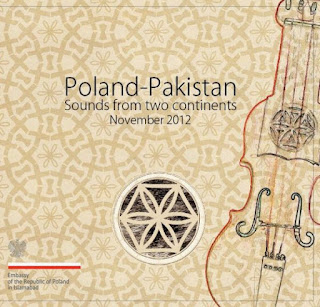 This music cd was produced by the Institute for the preservation of Art and Culture (IPAC) in collaboration of the Embassy of the Republic of Poland in Islamabad.

The power vested within a single musical note is undeniable; it can transcend political boundaries and overcome social barriers. This project aimed to bring musicians from Poland and Pakistan closer and help strengthen cultural ties between the countries. This exchange program fostered an exchange of ideas, information, values, traditions, beliefs, and other aspects of culture, and nurtured mutual understanding of the cultures of both Poland and Pakistan.

Maria Pomianowska is a graduate of the Chopin Academy of Music, a professor of the Academy of Music in Cracow, a multi-instrumentalist, a vocalist and an exceptionally talented composer. She is also the artistic director of the Cross Culture Festival in Warsaw. In recognition of her outstanding achievements she has been awarded the Chopin’s Passport, the Medal for Merit to Culture, the Marshal of the Mazovia Prize, the Woman of success in Mazovia award and the Silver Cross of Merit.

Since 1984 she has been studying unique techniques of playing Asian instruments, while travelling to India, China, Korea, Mongolia, Japan and Middle East. Her comparative studies and multicultural experiences allowed her to reconstruct two forgotten traditional Polish instruments: Suka from Bilgoraj and Fiddle from Plock. In 2010 she opened the first Ethnic Music Department at the Academy of Music in Cracow in Poland and also created the first Suka & Fiddle orchestra in the world.

Marta Sołek is a graduate from Academy of Music in Cracow and is the only student in Poland with diploma from division of ethnic music.  She is a very talented multi-instrumentalist and plays the cello, polish folk bass, BiłgorajskaSuka, MielecSuka, Plock Fiddle, Gadułka and Greek Lyre. She is one of the leading students of Maria Pomianowska and has mastered some of the rare traditional instruments of Poland such as the Suka, Plock Fiddle and Polish Folk Bass.

Marta took part in many projects around the world, ranging from concerts of classical music while playing with symphony orchestras, jazz concerts, theatrical performances and ethnic music festivals. She is permanently associated with the music group “ArcusPoloniae” – the first in the world knee fiddle orchestra. She is also associated a revolutionary women’s folk formation music band “Same Suki”.

Taimur Khan is a prominent Sarangi player and a leading disciple of Ustad Allah Rakha – the last great living Sarangi maestro of Pakistan. Taimur’s interaction with music started with a guitar when he was a teenager. He eventually fell in love with Classical Music and started his experiments with Rabab, Sitar, Violin and finally Sarangi. Having played the Sarangi for 15 years, Taimur is little known for being a Medical Doctor. He learned under the teaching of UstadMubarik Ali, UstadMehfoozKhokhar and eventually Ustad Allah Rakha. At the same time, he gained invaluable knowledge from the recordings, texts and commentaries of RajanParrikar.

Taimur has performed in many local and international art platforms such as Radio Pakistan, the All Pakistan Music Conference, the Institute for Preservation of Art and Culture, and The Islamabad Music Society. He has also represented Pakistan in the Pakistan-Norway cultural exchange program.

Muhammad Ajmal Khan is a leading Tabla player of Punjab Gharana and a pupil of the late Tabla maestro MiyanShaukat Hussain. He was born and raised in a musician family with 4 generations of artists and started playing the Tabla at a very early age.

He has been playing the Tabla since the last 40 years and accompanied some of the leading Pakistani singers of classical, semi-classical and folk music such as NusratFateh Ali Khan, Mehdi Hassan, UstadSalamat Ali Khan, UstadAmanat Ali Fateh Ali Khan, TufailNiazi, Madam Noor Jahan, Farida Khaanam, IqbalBano, UstadShaggan Khan, RoshanAara Begum, AbidaParveen and ArifLohar. Intentionally he has performed in more than 60 countries with international artists from all sorts of genres. In recognition of his outstanding achievements in music he has been awarded the prestigious President Pride of Performance Award by the Government of Pakistan.

Azam Khan hails from a traditional music family. He is the son of the legendry BakshiSalamatQawwal. He has been exposed to Classical Music since an early age and learned under the supervision of his father and uncle. He was also a student of the late NusratFateh Ali Khan.

As a vocalist, he belongs to the QawwalGharana but has mastered Classical, Semi Classical, Ghazal and Sufi forms of vocal music also. He has been performing for more than 45 years. He has performed at various international festivals such as London Mela, Womad festival in France, Spain and U.K, Manchester Mega Mela, Streets of Brighton and Manchester’s Garden of Delights.

Lipa is a Lime or Linden tree in Polish language; in this song it symbolizes a young maiden who is losing her carefree days of youth. The flowers of the tree are very sweet smelling of which the bees are making honey, as sweet and delicate as a young innocent girl. The context of the song is sad, when the maiden is left alone waiting for her beloved.

Zbójnicki in polish language means the dance of robbers. This song is music for the folk dance from Podhale, the mountainous region of Poland. It is a collective name for a number of steps and dances performed for centuries at Podhale. This highland dancing is traditionally performed by a group of men who very often use axes as an accessory.

The BilgoraySuka was brought back to life by Maria Pomianowska after her inspiration from playing the Sarangi. Therefore in many ways the modern day Suka owes its existence to the Sarangi. This instrumental piece is a brilliant fusion bringing both these instruments together like the intimate reunion of lovers apart.

Chmiel is the polish name for the Humulus or Hop plant. This song is the oldest known ceremonial wedding song. The song probably comes from pagan times, and was traditionally sung at midnight, at the wedding ritual of removing the bride’s veil. The song associates the relationship of the young couple to that of the hop plant and the poles that hold it up.

Oberek is a lively dance and is one of the national dances of Poland. “Oberek” is derived from “obracaćsię” which in Polish means “to spin”. This dance consists of many lifts and jumps and is the fastest of the Five National Dances of Poland. The beauty of the Oberek depends on each individual dancer’s talent of spinning at the fast tempo of the Oberek music.

This piece is the rendition of RaagJaijaiwanti on the Sarangi. A Raag means “colour” or “passion” in Sanskrit, in the classical music of South Asia it is a melodic framework for improvisation and composition. This is an exceptionally tender Raag, which traditionally depicts the sadness of a woman who pines for her lover. This majestic and highly arresting Raag is assigned to the night hours.

Suwany means to shuffle; this is music for a dance routine which is based on slowly shuffling of legs. This form of Polish folk dance is popular in rural areas in many Polish regions, especially in Mazovia and Radomszczyzna. This very slow dance music is based on the triple rhythm which is the signature of all Polish dances.

Chorea Polonica literally means “Polish dance”. This music is associated to dance that was extremely popular in Poland during the 16th century mainly at royal and noble’s courts. This form of dance has now disappeared in Poland but can be found in the traditional orchestra of Spain, France and Scandinavia.

This is a devotional song comprising of poetry by Sufi poet and mystic Khwaja Ghulam Farid. It is in Seraiki language of the south Punjab region of Pakistan. This style of semi classical Sufi music is called Kafi. The song portrays the feelings of a divine lover who can’t find a sympathizer to share his feelings as he groans alone in the ecstasy of love for his beloved, the creator.

This song is the instrumental version of a 16th century traditional polish melody. The literal meaning of StużyłemjaTobie are, “I was your servant”. The song tells a tragic love story, where a man loves a woman who doesn’t love him back. In despair the man is going to leave his home and undertake a journey from which he shall never return.


Quite some time ago, while in India, I understood that music, in its entirety, has already been composed long ago, and resides in a place that is beyond space and time. In creating it, we artists are essentially just discovering something that already exists, much like an explorer uncovers new territories. We simply extract it from potentiality, and materialize it.