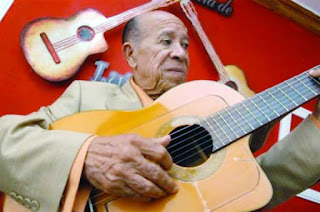 This illustrious “maker of songs” was born on October 11, 1916 in Pimentel, Dominican Republic.

He first made his living as a carpenter and thus he made his first guitar, which soon led to his becoming an excellent guitarist, a talent he inherited from his mother who was a consummate guitar player. One day he fell deeply in love with his boss’ daughter and wrote for her his first song “Yo Vi Un Celaje” (I Saw A Sign).

He became so involved in singing and composing that his friends would worry: “He has a constant ‘heart to heart’ meeting with the muses”.

When his parents separated, together with his mother he moved to Bonao, where he pursued his musical passion and formed his first group. A second love led to his composing the now classical “Serenata De Amor” (Love Serenade). He loved to fall in love and compose beautiful songs for each new love. When juke boxes and 78 rpm disks became popular local musicians worried that the new technology would replace them, but Kalaff persisted in his art.

He formed the trio “Alegres Dominicanos” with Pablo Molina and Pedro Lapaix and soon signed a contract to perform in the radio stations “La Voz Del Tropico” and H.I.Z. When Lapaix left the trio Bienvenido Brens, another one of our great composers, took his place and together they created their best hits and performed in the historic radio station “La Voz del Yuna” where all the giants of the era played.

The trio then toured throughout the country charged with preserving their autochthonous rhythms. It is then that Don Luis composed “La Empaliza” one of his most emblematic works, which has been widely recorded, including a version by Julio Iglesias.

His creative genius is inexhaustible, he is always awake, in perpetual motion; his songs appear one after another and travel throughout the world carried by the best voices of the era, from Oscar de Leon to Celia Cruz among many, many of the biggest legendary names.

His tour of musical preservation through the inland small towns resulted in excellent works added to the country’s musical heritage, including the “mangulina” rhythm, with songs such as “Baitolin”, “Compay José”, “Compadre Cholo”, “Malao” and “Guayacanal”.

Undoubtedly Don Luis Kalaff must have sworn eternal love to the love of his life: Music. At 93 he is still enveloped by the creative fire that only great artists have in their hearts. He has been a Peer composer since the early 50’s – probably one of the last surviving great composers. With over 700 songs to his credit, his works have been recorded by Julio Iglesias, La Lupe, Oscar d’Leon, Celia Cruz, Daniel Santos, Sergio Vargas, and Fernando Villalona among others – a living legend in his native Dominican Republic. 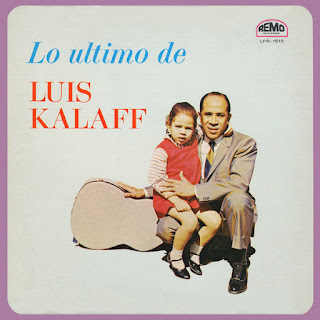 Thanks for continuing to come back and share wonderful music with us!

View my complete profile
One step leads to another...
and another...


It is not that there aren't any
answers to all the questions...