While my tar gently weeps... 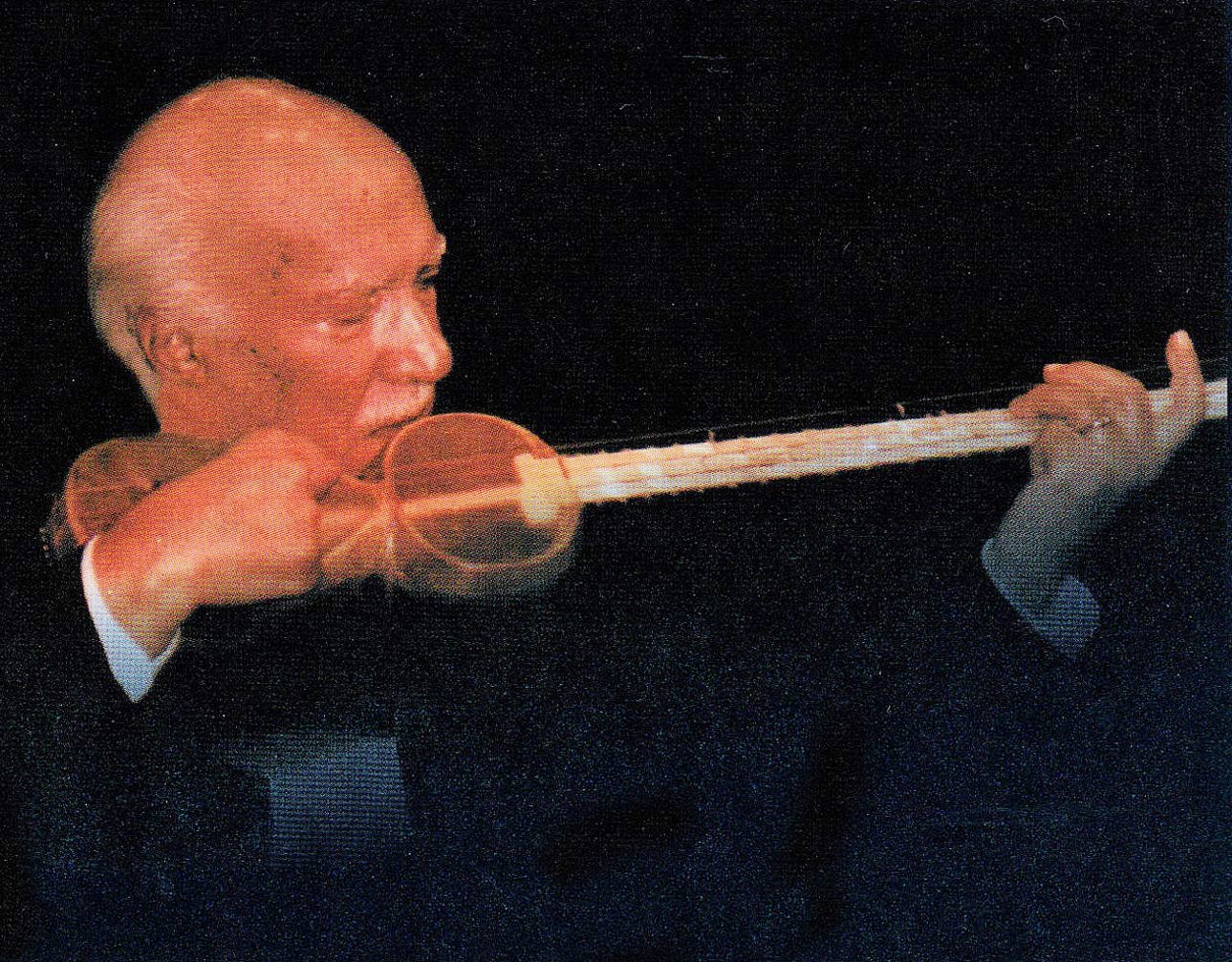 ♫☆`*♥¸¸.•*¨*•☆♫`*♥¸¸.•*¨*•☆♫
Ostad Ali Salimi was born in 1922 in Baku. Poverty of the family was the major obstacle for him to enter the field of music. His parents encouraged their son to study in science and technics in the hope of overcoming the unpleasant situation. But his fervent adoration for music worked at last, and he persuaded his mother to buy him and instrument. The father objected him, but in vain, and one of his relatives bought a tar for him. Finally his father abandoned his first attitude and accepted the condition. Music lessons began in Salimis' house, with only a single room to live. At the age of 11, he registered as a student in Music School of Ship-manufacturing Factory, where his father worked. The weak quality of teaching caused father to seek for another tutor. He was found, the prominent tar master of Azerbaijan Ahmad Bakikhanof, with whom he developed a rare kind of friendship and intimacy. In those years Stalin government forced Iranians either to accept Soviet citizenship or to leave for Iran. Father was prisoned for 2 months and Salimi abandoned his studies and hid himself until 1938, when all of the family left USSR for Iran. The family settled in Mazandaran and Salimi left there for Tehran. The poverty continued but there was hopeful news which informed Salimi that an Azerbaijani Orchestra had been founded in National Radio. The Council of Music (Moshir Homayun, Ruhollah Khaleqi, Abolhasan Saba, Hoseyn-Ali Mallah) tested the young artist. Salimi had studied composition, counterpoint and harmony before and was regarded as a brilliant artist and at last was appointed as the conductor of the newly-founded orchestra.

Salimi married in 1959 with one of his co-workers. His wife was a symbol of fidelity and sacrifice. Several of Salimi's works were premiered by the voice of his wife. In 1963 the orchestra was disbanded and all of the economic pressure of the family was put on the shoulder of his wife, who worked with sincerity as a dressmaker. 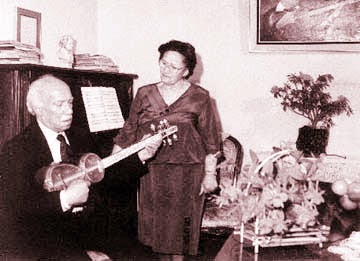 When the "Orchestra of Culture and Art" was founded, Salimi was invited again. The first program was held in Rudaki Hall in the presence of late Ostad Shahriar. It was based on Heydar Baba epic poem by Shahriar and some other works all composed by Salimi, and fortunately it was well received. Then the orchestra toured Iran with great success. Afterwards Salimi went to Tabriz and collaborated with some other masters such as late Qolam-Hosyn Bigje-Khani and late Ostad Dadestanpur. After the revolution, Ostad Salimi worked permanently with Tabriz radio and Television fund and composed many pieces.

In 1962, Rashid Behbudof - the famous tenor of Azerbaijan Opera Company - came to Tehran to give concerts. He was deeply moved by hearing the famous composition of Salimi, Ayrilig and with kind permission of the master, he managed to record this beautiful song performed by himself.

In addition to Airliq - which has been performed in countless versions and arrangements - Ostad Salimi composed many other instrumental and vocal pieces. Of these works Heydar Baba, Siza Salam Gatir Misham, Gejalar are performed and recorded. Some of his compositions have not been published yet, for example a piece for voice and orchestra, based upon the translation of Rubaiyats of Omar-Khayyam. His course book on Azari Tar known as "Tar-e Maktabi" (Scholar Tar Playing) is a precious work in this field.

Ostad Ali Salimi passed away in 1997 in Tabriz.

May his cherishing memory last forever and ever.

"Beloved tar player, composer and music instructor Ali Salimi died in Tabriz in April 1997. Salimi was born in Baku in 1922. In 1938, at the beginning of World War II, Stalin ousted all non-citizens from the Soviet Union. Salimi's mother did not want to be separated from her husband, an Iranian, so she lied claiming that she was a native of Ardabil (Iran) and, thereby, succeeded in getting herself and her children eligible to join the crowds of refugees heading south to Iran. Salimi, a youth at the time, fled with the refugees carrying only his tar across the border.

In the 1940s and 50s, performing music in Iran was associated with drug addicts and smoking opium, but Salimi's music was so dearly loved that officials invited him to start playing everyday on Tehran Radio. He later went on to create a string ensemble for the radio which continued until a few years before the Islamic Revolution (1979).

Salimi is most remembered for the hauntingly mournful melody of "Ayrilig" (Separation), a song set to lyrics written by Farhad Ibrahimi which was an immensely popular hit in the late 1960s both among Azerbaijanis living in the North (Soviet Azerbaijan) and the South (Iran). Both Baku's Rashid Behbudov and Tehran's "Googoosh", a famous Iranian female singer of Azerbaijani descent, popularized it. The song also played a symbolic role in Baku's quest for independence in the late 1980s."

"I had a great love for music from very early childhood. My parents, however, were not musical at all. They thought music would prevent me from doing well in my studies. They were both very religious; that's another reason why they were against my love of music.

But whenever I heard the tar strings vibrate, it used to tug at my heart so deeply. Eventually, my aunt bought me a tar. She told my parents, "Don't you see? This kid is dying for music! Why don't you let him play it?"

And that tar became my life. I used to practice it everyday. I really took care of it, I would varnish it, make it shine. When my father understood how deeply I loved this instrument, he arranged for a music teacher to instruct me at home. A year later, my teacher told my father, "I can no longer teach your son; he already plays better than I do." I was about 11 at the time." 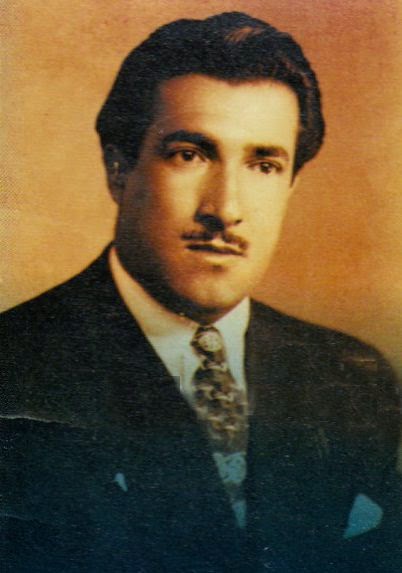 hey there :)
could you explain how to unrar these rar files, like the one attached to this post ?
it doesnt really work, something is wrong with this rar format or the content of it, so it fail to be decompressed

No idea what goes wrong on your side...

oww, thanks !
it didnt work for me using unrar on linux or simialr tools, but IT WORKS with winrar (using Wine, which runs it under linux).
and this guy music is truly beautiful.

So glad you can listen now :-)